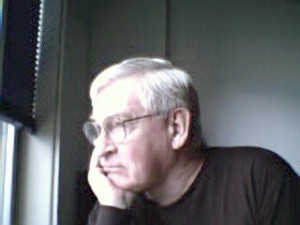 I was an Irish Catholic kid who became a Jesuit at age nineteen. That was an effort to escape myself.  After 14 years there, I set out on a pilgrimage to find the key to culture. I got a Ph.D at the University of Chicago, explored new age offerings and ended up studying bodywork with some true pioneers. The first of these was Kay Ortmans Pawley, who had worked with massage, movement and classical music for forty years in Ben Lomond, California. When I met her in 1991 in Madison, Wisconsin, she was 84 years old and still going strong. She died in 1997 at the age of 90. Then I trained in Hakomi for bodyworkers (1995) and in Hakomi trauma treatment (1997). Now I get it. You can touch trauma imprints.

In 1966 at the age of 33 I went through a “conversion” from religious to secular spirituality, a change of world-view precisely the reverse of the classic conversions of western civilization — such as those of St. Augustine and St. Ignatius Loyola — but perhaps identical with the great conversions of Eastern religion, such as those of Lao Tzu and Shakyamuni. Since that  time I have been busy trying to articulate the meaning of my transition.

When it started, I was a Roman Catholic priest of the Jesuit order, and when it ended, I was a “secular theologian” with a Ph.D. in sociology from the University of Chicago, thinking about what will be the form of the  “post-christian” global culture that will integrate the substance of Torah, New Testament, Koran, and the legacies of Buddha and Lao Tzu (to name but the major players on the world stage of spiritual inquiry).

I do not go to church at all any more, yet I am also “high orthodox” in my Christology. I think Jesus is the incarnation of the second person of the blessed trinity.

In my formative years I was thoroughly steeped in the old, stable system of traditional values. In my youth there were no major doubts about the basic outlines of world-views. I remember Eisenhower. My life broke in two in 1966 when I was 33 years old. The second half of my life has been in the openness of new formulations until very recently. I tumbled in the turmoil of uncharted experiments with truth for forty years. Although I have always recognized the historical importance of the old system, I was never tempted to go back, even when things were craziest and darkest. Going back was too obviously, to me, a selling-out of my spiritual assignment. It would have been like Abraham giving up the desert and going back to Ur.

Along the way I picked up a useful piece of equipment at the University of Chicago. In the grey city I learned how to read big-picture social forces. These are the sea changes that toss the skiffs of our individual lives and our institutions.